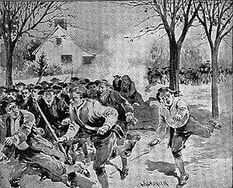 Domestic Tranquility and the Constitution
by Don Powers, Esq.

The preamble to the U.S. Constitution is a combined statement of rights held by “We the People” and duties owed to us (We the People) by our Federal government. One of the government’s duties is to, “insure domestic Tranquility,” which we have the right to enjoy. Not often used in today’s world, this phrase was selected by the Founders to identify a national environment free of civil unrest and violence.

At the time of the Constitutional Convention, America had been through a Revolution and was still struggling to pay its debts, while barely holding onto a union.  One concern shared by the Framers was the inability, under the Continental Congress and the Articles of Confederation, either by force or persuasion, to quash rebellions and quell quarrels amongst the states. Shays’ Rebellion, an outbreak over foreclosures on farms, occurred shortly before the Constitutional Convention.  Additionally, several states, such as Connecticut and Pennsylvania, approached armed conflict with each other over territory. Thus, a main goal of the Convention was to position the Federal government to assist states in times of rebellion and to smooth tension between states over borders, trade and other disagreements. Although a strong Federal government was necessary for some things, the Founders were steadfast in limiting its powers. Their goal under “domestic tranquility” was, first and foremost, to preserve the sovereignty of the states.

The right that we have under “domestic tranquility” is to live in a law-abiding environment so that there is a sense of tranquility in our lives and the lives of those around us.  The duty required of the Federal government is to assist the state, if necessary, in maintaining a law-abiding environment without usurping any power of the state.  This duty is directed at mobs, outlaws, invading enemies, illegal aliens or any effort to forcibly overthrow the elected, legally constituted, republican form of government guaranteed by the Constitution.

Thomas Jefferson cautioned that we must preserve our unalienable right to rise up and take control of our affairs.  All citizens, according to Jefferson, should be cognizant of the great difference to be found in spreading havoc (by an illegal mob from within or an invasion by force from without) versus actions taken to restore rights.  He also made it clear that the ends do not necessarily justify the means, but preserving the Constitution is a justified reason for push-back.
_____________________________________________
Don Powers is an attorney and award-winning Constitution instructor in Oklahoma.  He received the George Washington Honor Medal from Freedoms Foundation at Valley Forge in 2012.  Complete bio here.