This is why we have an Electoral College: 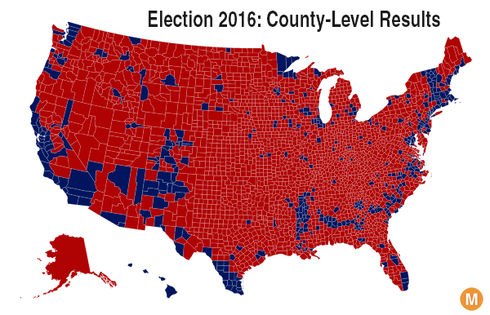 Should 10% of the territory set policy for an entire country?

(Under the American system of independent states and an electoral college, no one gets to decide policy for everyone else.  No one is forced to live contrary to their ideals -- each state gets to choose its own destiny.  That's tolerance, and it helps us get along.)
– –
The Electoral College exists to ensure that a larger plurality of states are represented.

That's important.
Imagine if votes on passage of international treaties were weighed according to size of the population of each country negotiating -- China and India would make all the policy. And imagine the discontent of the nations ridden over rough-shod...
That's not "consent of the governed."
– –
One state casting more than its share of votes diminishes everyone else's vote.  So if the National Popular Vote interstate compact's goal is truly to fairly count each and every qualified vote, will California still be casting the several votes it gained by including illegal aliens, as part of its population for the U.S. Census?
– –
The National Popular Vote compact would seem to violate the Constitution's Article IV, section 4's "guarantee to every state in this Union a Republican Form of Government."
If Minnesotans' electoral votes are decided in California, how is that a "Republican Form of Government" for the citizens of Minnesota?
– –
If the goal is majority rule, why not eliminate the Senate? After all, why should Rhode Island get the same number of senators as New York?
(Answer: So each state has equal representation in one branch of our federal government.)
– –
When majority rules, who'll protect minorities?
– –
If issues were decided by the size of a country's population, (in order of population) China and India, then Indonesia, Brazil, Pakistan, Nigeria, Bangladesh, Russia and Mexico would be in charge of our economy (and our daily lives).

In Europe, Germany, the U.K., France, and Italy would decide affairs for the entire continent.  How would Montenegro, Monaco, Lichtenstein, Denmark, Switzerland, Greece, and Sweden feel about that?