It is an article of faith to some class warriors that the rich do not pay their “fair share” of taxes. Is it true?

We can evaluate this claim since there is plenty of publicly available data. The data here comes from a 2016 CBO report.

Effective tax rates
It is difficult to look at the tax brackets themselves and draw a definite conclusion about fairness. Taxable income for most people is impacted by various deductions, exemptions, and credits that phase in and out at different income levels, and that apply in some circumstances but not others.

“Effective tax rates” cut through all this complexity and tell us what percentage of income is paid out as taxes. For example, someone who pays $5,000 of taxes on $50,000 income has an effective tax rate of 10%. 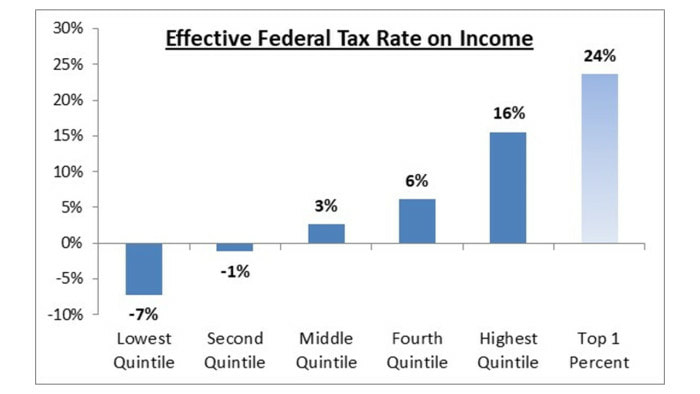 As you can see, the effective tax rate for the lowest one fifth of earners is quite low at negative 7%. The rate is negative because low earners pay no federal income tax and in fact receive cash payments from government due to credits like EITC. The second-lowest quintile is also negative, which means the bottom 40% of income earners pay no income taxes and receive a cash subsidy from the tax code.

For the middle fifth of earners, only 3% of their income goes to income taxes. The top fifth pays 16%. At the very high end, the One Percenters pay 24%.

Clearly, those with high-incomes pay much higher taxes than those with low incomes.

We can also evaluate this claim. The same CBO report includes a comprehensive view that includes ALL federal taxes. It includes the income taxes mentioned above plus all payroll, corporate, and excise taxes.

The graph below shows the effective tax rates based on this comprehensive view of federal taxes: 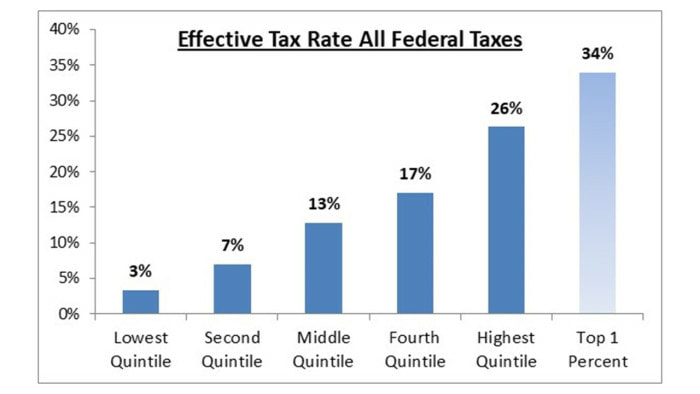 As you can see, when we include ALL federal taxes, the lowest one fifth of earners pay an effective tax rate of 3%. Not negative, but still quite low. For the middle fifth, it’s 13%. For the top fifth, it’s 26%. The One Percenters pay 34%. 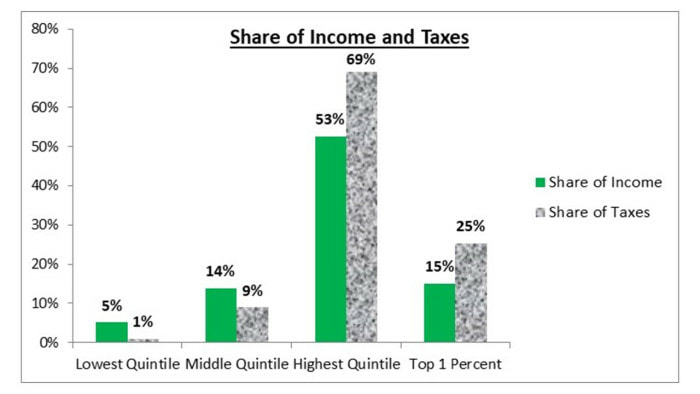 Do the rich pay their “fair share?”
So, do high-income folks pay their fair share of taxes? “Fair share” is a vague and nebulous concept, but I’ll try to answer the question. Let’s evaluate (a) in absolute terms and (b) in comparison to other income groups.

In absolute terms: The question here is, do the One Percenters pay ‘enough’ taxes?

34% of their income goes toward federal taxes. But that’s not all; they also pay other taxes. State and city income taxes, property taxes, various sales type taxes, etc.

Including all types of taxes, most One Percenters pay 45% to 55% of their income in taxes. Is that high enough?

It’s a judgment call, but in my opinion, it’s high enough. If half or more of your income is taxed away, you are working more for government than for yourself and your family!

In comparison: The question here is, do the One Percenters pay enough taxes compared to other income groups?

Conclusion: It seems reasonable to conclude that the rich do indeed pay their “fair share” of taxes. Claims to the contrary are closer to fact-free propaganda.

Inequality and the tax code
Despite the facts, no doubt some readers are still not persuaded that the rich pay enough taxes. They should understand that the tax code cannot eliminate economic inequality.

First, inequality is created outside the tax system. The tax code does not create inequality.

Second, there are limits to what can be done via taxes. A limited amount of redistribution is good for society, but too much will cause economic stagnation. Why? Because high taxes and generous assistance programs discourage both high and low earners from engaging in productive economic activity.

Third, economic stagnation is not good for anyone, including low earners. The importance of economic growth cannot be overstated (see this post), and growth is better for everyone. Too much redistribution kills the goose that lays the golden eggs. A focus on growth is more socially harmonious and economically effective.

The well-to-do already pay disproportionately higher taxes to help the less-fortunate. Can we call a ceasefire in the class war, and focus on growth?