In 2009, ordinary Americans recoiled at the prospect of being saddled with disastrous new debt, from almost inconceivably irresponsible federal spending.

Nine years hence, catching our collective breath, one wonders: how did the federal government get this large, this intrusive, this involved in our daily lives?

A simple review of the historical budget documents of the United States [1] provides us with a simple answer: a progressive redefinition of the purpose of federal government from one that ensures our collective safety and freedom, to one whose mission is ensuring our individual comfort at our fellow citizens' expense. This progressive government mission has been taking an ever-increasing share of the national wealth, substantially according to ability, and redistributing same approximately according to need.

In witness, the federal budget category representing federal checks sent to individual citizens, “Payments for Individuals,” inflation-adjusted into constant 2009 dollars, has risen from $26.3 billion dollars in 1940, to $164.5 billion in 1962, to an astounding $2.27 trillion dollars in 2018 (estimated), far exceeding any other category. (Yes, those figures are inflation-adjusted. Really.) This category now comprises over two-thirds of annual federal outlays, far exceeding any other category. 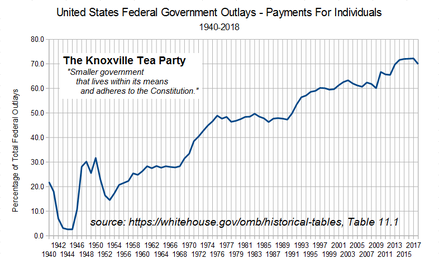 [1]  available at the Office of Management and Budget, https://www.whitehouse.gov/omb/historical-tables/

In other words, socialism. Socialism has driven the debt, deficit, and spending.

This change of course has had a momentous impact on the federal budget, on American politics, on American society, and on American liberty.
Socialism is the root of American social, financial, political, and moral change. That's how we got here.